Building the port of tomorrow today.

BACK TO REPORT HIGHLIGHTS >
The Port of Virginia is moving forward on nearly $1.5 billion worth of infrastructure investments that are shaping this port into one of the premiere complexes of deep-water and inland terminals anywhere in the Western Hemisphere.

The money is being strategically invested over the course of a decade (2015-2025) on land- and water-side infrastructure projects that are designed to handle an increasing amount of export and import cargo. In the first half of FY20, we handled 1.48 million TEUs and volumes were on pace for another record-setting fiscal year when the pandemic hit.

Though the pandemic hit our cargo volumes hard, we never lost sight of our goal: building the most modern port capable of handling a diverse mix or cargoes that is served by the U.S. East Coast’s deepest shipping channels. Work on several strategic initiatives – the expansion of NIT’s south-side container stack yard and the channel deepening and widening project – continued uninterrupted throughout the pandemic. 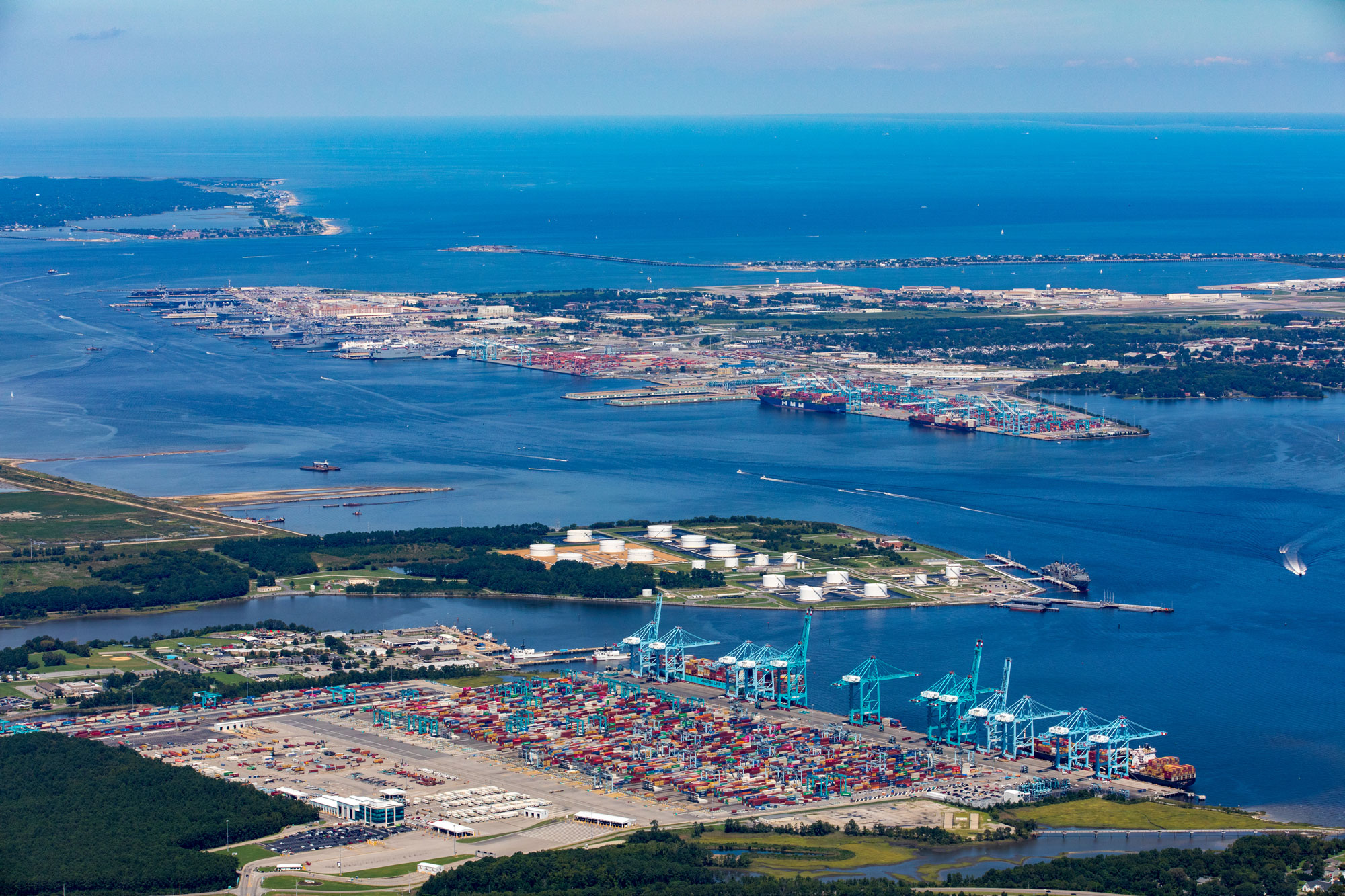 In addition, we’re helping new industries leverage the port’s assets and grow. At NIT, we are leasing space to a company operating a grain transload operation. Upriver at RMT, a similar situation developed: a long-time RMT user and international grain shipper needed more capacity and built two storage silos on our terminal to expand its export operation. And at PMT, an international sustainable-energy company is leasing space to support its expanding business.

In January 2020, Ørsted North America, Offshore and The Port of Virginia celebrated the Danish’s company decision to lease space at Portsmouth Marine Terminal; the move is being seen as the start of development of the offshore-wind energy industry in Virginia. (L-to-R: John G. Milliken, chairman of the Virginia Port Authority (VPA) Board of Commissioners, Virginia Gov. Ralph S. Northam, John F. Reinhart, CEO and executive director of the VPA, F. Blair Wimbush, vice chairman of the VPA board, and Thomas Brostrøm, president and CEO Ørsted North America, Offshore.)

At NIT, we have put the final touches on a $400 million expansion that has completely reshaped the terminal’s south-side container stack yard. The nearly two-and-a-half year effort replaced the straddle carrier operation with 60 new automated stacking cranes. Moreover, we added two ship-to-shore cranes to the south berth, giving us 10 Super Post Panamax cranes there capable of handling the biggest ships crisscrossing the Atlantic Ocean. With that project finished, we are now developing a plan for rebuilding the terminal’s Central Rail Yard. This project would enhance our double-stack rail service that reaches deep into the nation’s Heartland and meet the needs of a growing number cargo owners there.

The expansion at NIT and VIG – and overall growth in cargo volume moving across the port –are closely tied to the project that will make Virginia home to the deepest port on the U.S. East Coast. The $350 million project will make the Norfolk Harbor 55 feet deep and the approaches into the harbor from the Chesapeake Bay and Atlantic Ocean 56 feet and 59 feet, respectively. A 55-foot-deep harbor will allow the biggest ships afloat – and their corresponding cargo loads – to call Virginia without restrictions on tide as some other ports experience. Additionally, the project clears the path for two-way traffic in the harbor of ultra-large container ships, thus improving the efficiency and safety of all vessel movement in the harbor. Virginia was the East Coast’s first port with 50-foot channel depths and will soon recapture the title of the East Coast’s deepest port.

The port has four deep-water terminals: two container and two multi-use facilities. This level of diversity allows us to handle everything from household items to automobiles to refrigerated goods to military cargo. And while driving business, this unique set-up affords us the opportunity to be creative with how best to utilize our assets.

In the winter, we leased a portion of PMT to Ørsted, a European green-energy firm that focuses on generating electricity from offshore wind turbines. In Ørsted’s search for a suitable staging platform for its East Coast offshore projects, PMT became the logical choice. The terminal’s size, deep-water berth, strategic Mid-Atlantic location, safe harbor, and proximity to open ocean will allow the company to support its multiple projects at once.

Our long-term plan has always been to consolidate our container business at VIG and NIT and move PMT into the role of multi-use terminal. Lower container volumes brought about by the pandemic sped-up PMT’s evolution: we were able to reduce costs by ceasing container operations there. But with that move came the opportunity to use this resource to help out the cruise industry, which was in need of berth space for its idle vessels. Throughout the summer, three large cruise ships called PMT home.

Outside of the cargo opportunities, PMT will be the starting point for a new industry in Virginia, one that will generate jobs, investment and long-term opportunities for Virginians.

We’re doing what we do well

This past year, we’ve faced a series of unimaginable challenges and while our recovery is underway, it has not come easily or quickly. These challenges forced us to be realistic about our near-term expectations while focusing on those things that fueled our success up to the beginning of the pandemic: valuing customers and cargo and communicating with port users to better understand their needs.

Steadily-recovering cargo volumes being brought by big ships need modern, efficient, evolving deep-water ports: industry seeks these same qualities in the ports it uses. Because of our expansion, our diverse cargo handling capabilities and our creative willingness, The Port of Virginia is attracting industry to Virginia. These things combine for prosperity for Virginians across this state for decades to come.
BACK TO REPORT >

The Port of Virginia delivers opportunity by driving business to, and through, the Commonwealth.

The Port of Virginia’s diverse talent, agile use of technology, and command of our ever-changing industry sets the pace for the supply chain of today, while plotting the course for its tomorrow.

©copyright 2020, The Port of Virginia, all rights reserved